When you hear of an exhibition with a title borrowed from the Elvish language, what are the things that you expect the artists to present? “Mornië Alantië” is a collaboration between Joebert Gayoma and Paul John Cabanalan, two artists from the province of Iloilo who are both competition regulars and recurring cast in Museo Iloilo’s lineup. The exhibition is no Tolkien world, but similarly, it is replete with dark imagery and, perhaps, darker undertones.

Joebert Gayoma gives the audience variety — highly figurative paintings of body parts, abstractions foregrounded by found objects, and sculptures exploring forms (or lack thereof). In his paintings, Gayoma attempts to express and at the same time reveal themes that are oftentimes morbid and occasionally playful. His huge work entitled “Dark” is a cornucopia of images — a black cross, a figure with a feline-like face under the said cross, a window that eats the feline-faced figure; a burning face below it a dark marshland, and in the middle of it all, a Teddybear with face crestfallen. One has to wonder where the artist draws such highly disparate images. Myths? Social observations? Personal stories? Or a combination of all.

Gayoma explains that the artwork is about his inner demons and how he has overcome them, on his own or with the help of other people. “Dark” is the other half of a diptych called “Light” which is not included in the exhibition.

Gayoma nearly has an obsessive attention to the organs of the body, much like the heavy-metal album covers of the ’80s and the ’90s. He creates a shrine-like series of paintings turning hands, hearts, eyes, and brains into melting candles in the same Ozzy Osbourne colors. These are not studies of anatomy but perhaps work driven by the intention to force a certain reaction to the audience. Shock, perhaps.

The rest of Gayomas’s works is the artist filling the gap of the exhibition with some expressionist style paintings in the same bizarre manner that he renders his more figurative works.

The other half of this two-man exhibition is Paul John Cabanalan who seemingly matched the dark imagery of his collaborator. Cabanalan’s works are incredibly chaotic — layers upon layers of childlike doodles that can unmistakably be seen as drawings from an adult with the consciousness towards the audience that is almost performative. He keeps the audience stringing stories with each clue of doodle that he leaves on the canvas.

Cabanalan also attempted to be more figurative in his artworks as shown in his series of drawings where he layered disfigured faces with a mishmash of lines and brushes in various conflicting shapes and colors. He says that these are pages from his sketchbooks. Perhaps, the artist is experimenting and this is his expression of confusion and agitation in these dark times.

“The Moving Prayer” installation is the exhibition’s centerpiece– in the middle of the gallery stands three human figures appearing to light candles. The artists also invite the audience to light their own candles, breaking the dark mood of the whole exhibition. This is somehow a reference to its title which means “darkness has come” and when that happens we all become each other’s light.

However, the same title also produces a distraction. Mornië Alantië gives us room to talk about semiotics in art –that giving the exhibition a name can sometimes supersede its visuals. There are times when one is given artistic freedom, there is a tendency to use cues that bars the message.

Furthermore, to shed own darkness in an exhibition is a feat that few artists confront because that means honesty towards not just the scrutinizing public but the towards art itself. In tackling their own darkness, Cabanalan and Gayoma are bringing their art to a new light. 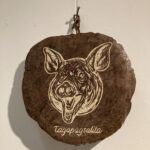 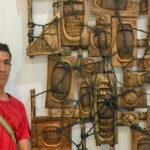 Art Questions: Is it Practical to do Both Digital and Traditional Art?

Click the image for larger view. The transition from...

Art Questions: Is it Practical to do Both Digital and Traditional Art?

Just like an altar, there is too much to...