My long and delayed reply to the image of the old lady at corner Solis and Muelle Loney streets:

In the past few generations, the culture of Binukot has become irrelevant because of new models of education and lifestyle. But 2020 surprised us all, we have become the unexpected Binukot due to the COVID pandemic.

This popularized image by popular artists of a Binukot is very sensitive and controversial since day one because it involves indigenous people. I avoided saying any word about this mural before, but since October is Indigenous Peoples’ Month, I guess this is the best time to discuss them. We have all the reasons to talk and learn about the Binukot and celebrate with the Panay Bukidnun.

I first met Nay Lapaz in 2004, she was married to “Tay Polding” Leopoldo Caballero a master chanter of Sugidanun and a binukot descendant on his mother’s side. Amidst the difficult life in the mountains, she liked to dress up, look beautiful, and dance the Binanog. A few years ago she became blind and later died. According to their family, Nay Lapaz was a binukot. Some may agree or argue on this claim, but I guess the most important thing here at this point is the conversation about Binukot, what we should know about and learn from them, and how we could reach out or take part in helping the vulnerable/marginalized community they are in during these challenging times.

Some ways to appreciate, understand and imagine the true Binukot is by reading or listening to the Sugidanun of the Panay Bukidnun. I am fortunate to have learned about this since 2004 through the works of anthropologists from Panay-Dr. Felipe Jocano and Dr. Alice Magos and through interviews and conversations with the surviving chanters. This oral tradition survived colonization and many generations through women who experienced the unique binukot discipline and education. Today, the old-style binukot Sugidanun chanters have all passed away, the surviving master chanters are men who descended from families with Binukot and Sugidanun traditions.

The Binukot was a human library/living archives and Sugidanun the complete data. This local epic mythology contains reflections of our ancestors’ concepts of place, identity, science, time, body, and spirituality. An index of their vast and sharp memories. A testament of wealthy language and imagination. They are sagas of “Tuyawan nga mga Binukot” and “Bunggaitan nga mga Datu”. Among the most popular binukot and datu pairs were Labaw Dunggun and Matan-ayun of Halawod (Iloilo) who became parents to Nagmalitong Yawa, the golden Binukot. From Pan-ay (Capiz) comes Humadapnun, the golden datu with the golden shield (kalasag) and golden boat (barangay) who becomes the perfect match for Nagmalitong Yawa.

In the Sugidanun the Binukot didn’t appear as an old woman. They were portrayed as unique and empowered young women. She is chosen to be a binukot because of her outstanding physical and intellectual qualities as a young girl. In her teens, her being binukot ends during Hungaw or her wedding day, her first public appearance. This means, the image projected in the mural as binukot is a shallow understanding of the concept and a far impression from the essence of its being. A misleading “image model”, the influential work should have exhibited her young beauty, not a wrinkled toothless portrait (grabbed from some random and unverified internet post). Another irony in the picture is that this representation of a local icon and an indigenous material was done by an outsider who missed a lot of significant information about the subject.

Yes, we want to promote local culture and traditions and embrace the help of outsiders but they should come from the proper perspective and with a due process such as consultation and permission from the IP leaders. Done with good intentions but with a huge misstep, the motivation to engage the audience and draw attention attached to the artist’s name out shadowed the focus on the subject matter. A lost opportunity to maximize meaningful content through the powerful medium. Technically, the well-executed mural should be tagged as exBinukot (if the basis is criteria on age bracket) or just Panay Bukidnun Woman to be safe, because we don’t explain murals all the time. They are on the walls to stand out on their own, appreciated because of their excellent composition, technique, and visual impact in the absence of text to guide the interested or disinterested viewer.

The reason they are called binukot– they stay inside the Bukutan, individual shelters attached to the main house of a datu. Inside the bukutan they learn different skills such as dancing (i.e binanog), playing musical instruments (i.e tulali, litgit) weaving (habul) and embroidery (panubuk), and the epic chanting. The binukot usually has a Tuos (an object of oath with great value) that interested suitors should match or surpass as bride price. In the Sugidanun, Matan-ayun‘s tuos was “Derikaryong Pada”, a golden pendant granted by powerful beings. In another story, it was Amburukay‘s tuos–“Sabot nga Bulawan” which made Labaw Dunggun marry Matan-ayun. Their bukutan was tore-tore nga bulawan sa tarangban ka mga muwa.

In the story of Alayaw, the golden binukot Nagmalitong Yawa (Mali) wanted to get out of the bukutan to pick sweet-scented Ilang-ilang flowers. This allows Humadapnun to see her beauty as a binukot. Their courtship involved the Banog, Parapagayo, and Punay asking Mali a tinilad (betel nut, lime wrap) for Humadapnun.

The tuyawan nga mga binukot were the real heroes in the Sugidanun. In the absence of Labaw Dunggun who became a pawikan, Matan-ayun transformed to become Boyong Makalimpong to fight Pahagunung. Nagmalitong Yawa transformed to become Boyong Sunmasakay to free Humadapnun in tarangban killing all the Diya who trapped him for seven years. They also transformed into other things to avoid harassment, Matan-ayun turns into water, Nagmalitong Yawa into kundol when touched without permission.

To me, the mural and its making accidentally revealed many truths. Truths and signs about government, influence, patronage, representation, and the prevailing visual culture. Minus the label, it indicates the sad plight of the Panay Bukidnun. The powerful image of a smiling wrinkled toothless woman tells a lot about resilience and confidence in the absence of a proper healthcare system amid poverty. Beyond the city walls unfold other critical issues surrounding their valuable yet marginalized community.

Government-funded murals are public properties, I wish to see more, but the next images linked to or labeled Binukot or Datu should be carefully researched instead of being rushed and hyped for whatever purpose. The point of this discussion is to “paint” or “make billboards” of truthful images of our local icons and symbols and to be enlightened and empowered with the meanings of these cultural pride. 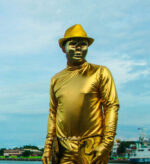